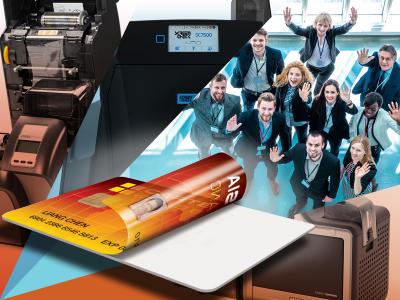 By comparison, traditional dye-sublimation direct-to-card printers use a printhead that prints through a ribbon directly onto the card surface; the printer’s expensive, and often delicate, printhead touches every PVC card directly, triggering increased printhead replacement. Any uneven part of the card surface—including contact with card edges—can cause expensive printhead damage.

Retransfer printing technology is superior to the previous generation direct-to-card print technology commonly used by certain Zebra, Fargo, Magicard and Datacard printers. A few of the advantages of retransfer printing include superior image quality, true over-the-edge printing for a better looking ID card, more area to print on, the ability to print on uneven card surfaces, a wider variety of cards, and a more durable image that is built-in tamper proof with the use of retransfer film. 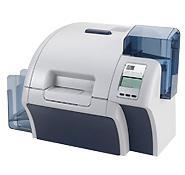 Single or dual sided lamination is also available. This retransfer printer is ideal for printing on uneven card surfaces, such as smart cards, or for when the application calls for very high image quality or cards that are more durable and abrasion resistant.

Retransfer Card Printers, such as the ZebraZXP Series 8 are printers that use heat and pressure in order to create a permanent image on a surface. In contrast to regular printers, which are used primarily for variant paper surfaces, retransfer printers are also used to print images on plastic surfaces, such as CD’s, although ID cards are among the most popular items that utilize retransfer printing.

How does Retransfer Printing Work?

Retransfer printing utilizes a two-step process. The first step is to print the image backwards onto the underside, or substrate, of a thin, transparent retransfer film. The second step is to place this film onto the item being printed on and to create an irremovable and identical image on the surface of the ID card or CD. Retransfer printing as well allows you to print images on a variety of variously shaped surfaces, such as smart cards.

No White Border around Image

Standard DTC, or direct-to-card printing, unavoidably creates a small white border of approximately 1/32nd of an inch around the perimeter of the card. While in some cases this border is desired, in some cases an image that is precisely flush with the edge of the card is preferred. Retransfer printing technology allows for the creation of images that extend to the end of the card. In order to accomplish this, the retransfer film must be slightly larger than the surface being printed on, such as the industry CR-80 PVC ID card.

There is another notable difference between retransfer printing and DTC printing. DTC printing requires that the printhead comes into continual contact with surface, on the order of thousands of cards per month, which gradually wears it down. The retransfer process extends the printhead lifespan by printing the image on the flimsy laminate film instead, thereby avoiding the wear-and-tear that occurs during DTC printing.